Deploying Infrastructure as Code on AWS

As we are transitioning from traditionally managed infrastructure to API-driven, highly elastic cloud-managed environments, the average lifespan of a resource is getting drastically reduced from years and months to mere weeks and days.

Due to the sky-high scalability of today’s cloud-based infrastructure, IT teams are required to provision a hundred things, much more frequently than ever before. Sometimes day in and day out they have to scale up and scale down resources to save on per-second billing.

Now, the question is—are you going to file thousands of tickets each morning to match the peak capacity and then spin down another thousand tickets at the end of the day manually? Clearly, that doesn’t sound wise and manageable in the long run.

So, how do you streamline this process in a way that’s robust and reliable? If you just murmured ‘automation’ under your breath then you are absolutely right! And to automate a process, you must go the coding way so that with one click, a script will spin up and spin down thousands of resources every day depending on the changing demand. And that’s precisely what Infrastructure as Code or IaC is.

What is Infrastructure as Code?

Infrastructure as Code (IaC) is the managing and provisioning of infrastructure through code instead of through manual processes.

With this practice, configuration files with specifications on the infrastructure are built to speed up the editing and distribution of the configs. It also ensures that the same resources or environment are provisioned every time. As you codify and document the specifications, it streamlines configuration management error-free while preventing ad-hoc changes to the config which if go undocumented, can wreak havoc (more on this later).

Why is it important?

With IaC, all you need is a script to spin up and down an entire infrastructure. Not just it facilitates deployment of virtual servers but also the launching of pre-configured DBs, load balancers, storage, network infra, and multiple other services. And this can be done quickly and easily across the deployment to production cycle making the process much more efficient.

As we were discussing above, any undocumented changes to the configuration template can disrupt the service or cause errors. But as version control is a key feature of IaC, it means if anything goes south, you can easily spin down the resource and revert it to a functioning template from the versions. At the same time, it offers configuration consistency and reduces any possibility of incompatibility issues, resulting in consistency and stability.

Because the configuration templates are simply codes, they come with unmatched visibility apart from being manually editable. All you need is a text editor as IaC clearly states resource creation parameters making it easy to see and understand what’s deployed. And that brings us to the next benefit of Infrastructure as Code i.e. minimization of risks. That means no single user is in control of the configuration. So even if the resources change, your infrastructure will remain intact.

The use of IaC is directly linked to an increase in developer productivity and an efficient development life cycle. IaC allows organizations to deploy CI/CD techniques which largely eliminates human error in the post-development stage. Moreover, spinning down of resources can be included in an IaC script automating shutting down of resources that the same script has created. As a result, your engineering teams will get a clean and highly organized cloud environment to work on further increasing productivity.

How to deploy Infrastructure as Code on AWS?

1. Use CloudFormation for resource provisioning

CloudFormation is an AWS management tool and the built-in choice for accelerating cloud provisioning with IaC. CloudFormation allows users to model, create, provision, and manage AWS resources as well as third-party resources by treating every infrastructure as code. Here’s how it works-

The first step is to define the description of the resource you are about to create with CloudFormation and then use the same tool to deploy it. The description template will look like this (in YAML syntax)- 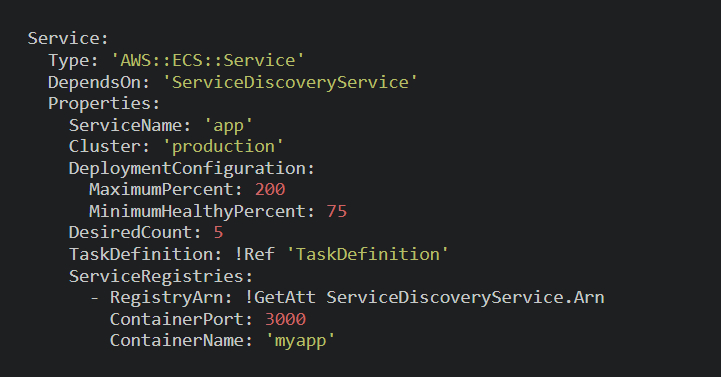 The moment you deploy it, CloudFormation will start spinning up and down resources following what’s written in the template. If a new resource is added/updated/removed in the CloudFormation file, it will carry forward the same action in your AWS account. In that way, the simple CloudFormation text file becomes the single source of truth for you.

2. Use Terraform for Configuration Orchestration

Next step is to define an execution plan to ensure a smooth running of the code. Terraform, like CloudFormation, is another provisioning tool that helps in describing infrastructure as code and creating an effective plan to outline what you will get when you run the code. Terraform uses JSON-compatible languages to create config files and can be leveraged to automate infrastructure in any cloud environment simultaneously.

NetApp’s Cloud Volumes ONTAP is another powerful tool that is used in Infrastructure as Code. This popular storage management solution is often used to deliver secure and stable services on AWS and other hyperscalers as it supports a massive capacity of up to 368TB and multiple workload use cases including DBs, DevOps, file services, etc.

But, what makes it a useful tool in IaC is its Cloud Managed, a UI and APIs that allows users to manage, automate, orchestrate, and support hybrid and multi-cloud environments, and use storage pools as a single element in the AWS IaC setup.

When configuring cloud storage solutions for enterprises and implementing IaC, ONTAP and Cloud Manager are combined together with Terraform to ensure the desired level of efficiency is achieved in such large scale deployments.

That’s the beauty of effective planning with DevOps on AWS as it brings remarkable transformation in your business. As the world’s largest application-focused cloud MSP, we, at Cloud4C, hold years of experience in providing the industry’s best DevOps on cloud solutions. This includes integrating cloud-native tools for agile workflows, deploying CI-CD pipelines and IaC, containerization and serverless adoption, microservices-favoured architecture development, and more. Embed security by design within the DevOps environment via SAST-DAST or full-fledged DevSecOps. If you want to make the most of implementing DevOps on AWS and witness high efficiency outcomes, click drop us a note at info@cloud4c.com

Want to know more about the plethora of DevOps services on AWS offered by Cloud4C?

EPP vs EDR: The Quest for Next-gen Endpoint Security

09 Nov, 2022
In the new normal, data drives modern businesses. This has become a bedrock for application…

07 Nov, 2022
For businesses looking to operate in a future-ready environment, the cloud has become the new…

From Insights to Action. Our Cloud Specialists are Here to Help.